Answering questions about juggling, in a classroom

Last week I went to spend the day at my kids' school. I visited several different classes, and mostly did basic school volunteer things, as part of a dad involvement program called Dads of Great Students (D.O.G.S.).

One of the teachers had me bring some juggling equipment and answer questions about juggling. It was a lot of fun. These were second graders. The teacher said she was trying to show the kids that you can grow up and get a job and still do interesting things too. :)

It's hard to remember any of the specific questions they had, but I tried to show them that juggling involves breaking motions down into small, easy-to-master movements.

Oh and there's this thing school-ages kids always seem to do, where they raise a hand to ask a question? But it's not really a question? Because they just want to tell you something? Something that they thought was cool? I think that's hilarious...except when you're in the middle of a question-and-answer session. :)
Posted by Aaron DaMommio at 12:12 PM No comments: 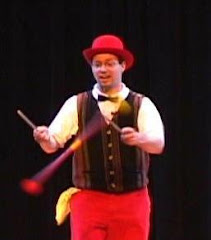